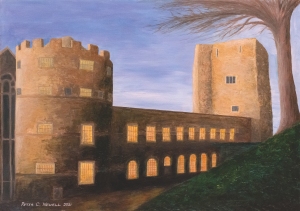 The painting is based on a photo I took in 2006 from the “Mound” but with the light altered to show the prison as in the evening light.
The Castle is almost one thousand years old and the site had (in 2006) just been opened as an historic tourist attraction.  The Castle was built by the Normans in 1073 together with the mound for strategic defensive purposes.   Later, in 1230 it was converted into a prison and gained a fearsome reputation.   During subsequent centuries, further buildings were added and the site used as a prison until 1996.

This site uses Akismet to reduce spam. Learn how your comment data is processed.